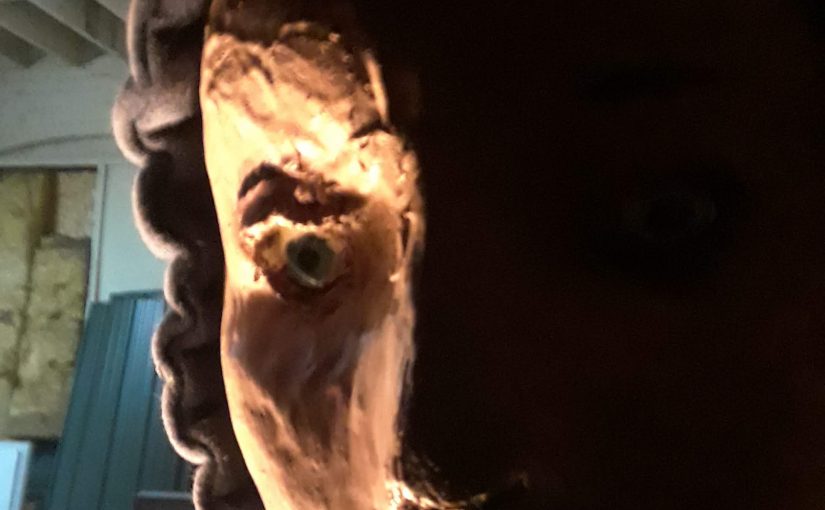 Down the hallway again. Most walls in apartment building halls are white, maybe grey or tan or cream, but those walls were red. The hall stank like eucalyptus and apartment cooking, other people’s cheap meat and noodles.  I knocked and stood back with my hand at my throat, annoyed by the deranged pulse. Waiting at the door. I looked out the black window. Waiting. There were trees in the dumpster below, silver tinsel shivering on the edges. It was cold, but there was no snow.

The door opened, not on Lizabeth, but on her nephew, called Matt or Mike or something.  He slumped with a bowl of ramen noodles and a bored face, eyebrows barely raised.

“Come on in, Margot.” He turned into the room. I followed him into the heat, hoping the human smells wouldn’t be too intimate.  Steam heat invaded my nose and my very pores with old woman smell: scalp and powder. Mildew and medicine. Not much evidence of the nephew in here.  Just piles and piles of papers and magazines. The long living room was dark with the shades drawn against streetlights and just two dim lamps on.  It was quieter than usual, and I realized it was because Lizabeth’s oxygen machine wasn’t on. “She’s not here. Where is she?”

Matt or Mike pushed some dusty Ladies Home Journalsand Usmagazines off the couch and onto the floor and motioned for me to sit while he went over to the old woman’s La-Z-Boy and reclined with his noodles.  “Oh, do you want to share my noodles, Margot?”

“No, thanks.” I smiled politely and sat in the dust.

“She’s at Giant Eagle.” He twisted up a fat wad of noodles on his fork. “She should be back soon.”


This is the opening of my first novel.